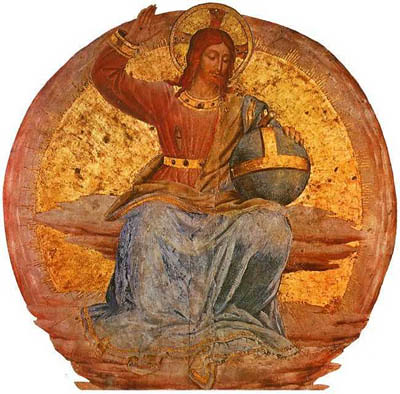 I almost dropped the book when I read these words of Pope Benedict in his new book Jesus of Nazareth:

[C.H.] Dodd was basically right. Yes, Jesus’ Sermon on the Mount is “eschatological,” if you will, but eschatological in the sense that the Kingdom of God is “realized” in his coming. It is thus perfectly possible to speak of an “eschatology in process of realization. (Jesus of Nazareth, p. 188)

I was a big fan of C.H. Dodd in my Calvinist years and I think that the notion of “realized eschatology” helped me to understand the efficacy of the sacraments and the need for a visible Catholic Church as the “realized kingdom” – perfect already, but not yet.

All of this relates to Origen’s notion that Christ is the autobasileus or the “Kingdom Himself” – a concept taken up by the Holy Father and endorsed by him (cf. Jesus of Nazareth, p. 49). Wherever Christ is present there is the Kingdom. This means that the sacraments of the Church (particularly the Eucharist as the Sacrament of Presence) are royal and eschatological.

No one can enter the “Kingdom” without water and the spirit. Baptism.

We are anointed as kings of the Kingdom. Confirmation.

We receive at the eschatological Kingdom banquet of the Lamb. Eucharist.

We are joined in the covenant of matrimony – a sign of the eschatological union between Christ and the Church. Matrimony.

Ministers are anointed as stewards of the King. Holy Orders.

The juridical authority of the kingdom to prepare for eschatological judgment. Penance.

We receive the Kingdom phenomenon of healing, deliverance, and redemption. Anointing of Sick.