It is impossible to be just to the Catholic Church. The moment men cease to pull against it they feel a tug towards it. The moment they cease to shout it down they begin to listen to it with pleasure. The moment they try to be fair to it they begin to be fond of it. But when that affection has passed a certain point it begins to take on the tragic and menacing grandeur of a great love affair. I was not always drawn to the Catholic Church. I once resisted it with great force. Today my wife and I (and our six children) are Catholic – Roman Catholic.

As Chesterton described in the quote above, the moment I ceased pulling away against the Catholic Church I was slowly (even without knowing it) pulled toward the Catholic Church. Nevertheless, many Protestants and Anglicans cannot comprehend why someone might be drawn to Catholicism in the first place.

Many will grant that the Catholic Church is impressive. A trip to the Vatican will verify this for you. The Church is the curator of priceless pieces of art. The Vatican is a city-state. The Pope has a seat at the United Nations. The cathedrals of Europe are spectacular. Many of the great universities and hospitals of the world find their origin in the Church. 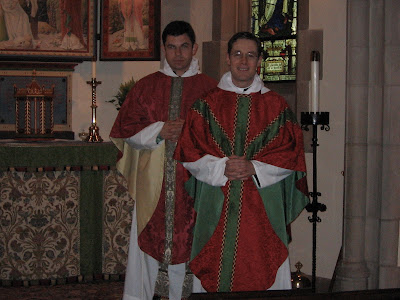 Yet there are strange and foreign elements that I found uncomfortable as I embraced my Holy Mother the Church – things that I had not encountered as an Anglican priest. There is the voiceless “silent Irish” phenomenon that occurs during hymns at Mass when nobody seems to be singing except for the ubiquitous cantor. The hymns were different, also. As an Anglican, we knelt for Communion. As a Catholic we were told to stand (!) for Holy Eucharist. I experienced churches in the round. I heard of alleged “Clown” Masses and other liturgical oddities.

Lastly, there were all the other elements of the Catholic Church that we Anglicans found questionable. Medici popes. Indulgences. Penances. Marian apparitions. What about the very serious blemishes, for example, the American priest scandals of 2003 and the years afterward?

Why would an Anglican priest in his right mind desire to become a Catholic?! 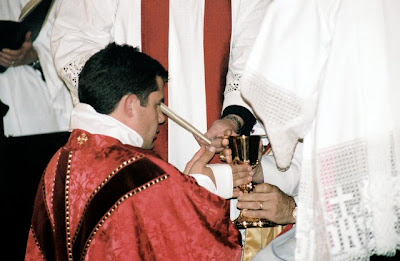 He is the head of the Body, the Church; he is the beginning, the first-born from the dead, that in everything He might be pre-eminent (Col 1:18).

Now I rejoice in my sufferings for your sake, and in my flesh I complete what is lacking in Christ’s afflictions for the sake of His body, that is, the Church (Col 1:24).

That you may know how one ought to behave in the household of God, which is the Church of the living God, the pillar and bulwark of the truth (1 Tim 3:15).

The “Church question” is therefore unavoidable. The biblical description of “the Church” cannot be equated with a local congregation or voluntary club. It is something much more. The Church is not the invisible “Soul of Christ,” she is the visible “Body of Christ.” There is no such thing as “an invisible Church,” because the Church is defined as “the Body” which is a visible, empirical reality.

Secondly, since the Church is the Body of Christ, then she must also be one. Christ cannot be divided. We must belong to a visible and united reality.

Thirdly, I became convinced that Christ instituted this Church to be authoritative on earth (“whatever you bind on earth”). He appointed Apostles and He promised that the gates of Hell would not prevail against His Church. The only way Hell could prevail against the Church is for the Church to be in error. To deny the Truth is to deny Christ Who is the Truth. Consequently, the true Church must be free from error. As Saint Paul wrote, the Church is “the pillar and ground of truth.” The doctrine that the Church is the pillar and ground of truth is in the Bible, which I hold to be infallible.

When I was an Anglican priest, I accepted an amorphous “package” of historical Christianity. I believed in the importance of the sacraments, the priesthood, Apostolic succession, tradition (to a certain extent), the infallibility of Scripture with respect to faith and morals, the communion of the saints, the centrality of Christ, the role of Mary in the incarnation of Christ, etc. However, I was not willing to grant the Roman claim that the Church is the Catholic Church under the pastoral oversight of the Pope.

I believed that the Church consisted visibly of all baptized and faithful believers. Consequently, I had believed as an Anglican that the Church was “visible” in a certain sense. It was “one” in that all the baptized faithful consisted of one single group. However, the problem was that this “group” was not free from error. In fact, as I experienced it as an Anglican clergyman, the “group of baptized” was indeed plagued with heresy. There was no final authority for truth, except the Bible and then even the Bible might be subjected to many conflicting interpretations.

In Anglicanism alone, even among the “conservatives” there were Low Churchmen (more Protestant) and High Churchmen (more Catholic). These doctrinal parties never could unite together in order to fight the evil liberals who also carried a very different interpretation of Christianity. So my quest was one for authority. The ultimate “breaking point” for me was the realization that the Episcopal Church officially condoned abortion and supports groups like Planned Parenthood. I couldn’t in good conscience persevere in fellowship with those who stood silent about the destruction of our society’s most vulnerable members.

The argument for the authority of Rome is not sophisticated. It is simply that Christ instituted Saint Peter to bind and loose on earth (clearly “earth” denotes his universal jurisdiction) and that this office is protected by the Holy Spirit so that the Catholic Church will never be led into error in the realm of faith (doctrine) and morals (ethics). The buck stops with Peter and with his successors in Rome, which includes the present Pope, His Holiness Benedict XVI. This charism for truth is not based on the moral superiority of the popes or their intellectual astuteness. It is based in the power of the Holy Spirit fulfilling the promise of Christ made to Peter and the Apostles.

I believe everything taught by the Catholic Church based on this solemn and divinely insured promise of Christ to St Peter.

The Future
In May of 2006, I fulfilled the canonical requirements to remove myself from ministry in the Episcopal Church. I should first say that I am grateful to Bishop Jack Iker (Episcopal bishop of Fort Worth) for his faithful witness and fatherly care. He has been very gracious to me. The most painful part this process was submitting my letter of renunciation to the man who has been a father-in-God to me. I still raise a hand of blessing over all my brother priests in the Episcopal diocese of Fort Worth.

I would also like to thank my former parish of St Andrew’s Episcopal in Fort Worth Texas for their love and prayers. The past several months have been a time of reflection and prayer over my vocation in Christ and how I might best serve in the decades to come. St Andrew’s is the place where Joy and I were married, where all three of our children were baptized, and where I was ordained deacon and priest. It is a home to us in more than one way, and I will miss the people dearly. I continue to hold them in my heart.

We were received by Bishop Kevin Vann of Fort Worth. My wife and I are so thankful for his wise counsel during a very stressful and confusing time. He is vigilant and ever-ready to serve those in need of prayer and guidance. The Catholics of Fort Worth, Texas are truly blessed to have him as their bishop.

My family moved to Washington DC, where I will at the Catholic Information Center with Father William Stetson. He is a very kind man and has been very gracious to me during this time of transition. Father Stetson is deeply involved in Anglican ecumenical affairs, and I will assist him with the Pastoral Provision by which Anglican priests can become Catholic priests.

As I unpack and have more free time, I will continue to post. It will likely be sparse in the next several days.

And lastly, it feels GREAT to be a Catholic! I cannot quite explain it. But it is a wonderful feeling! 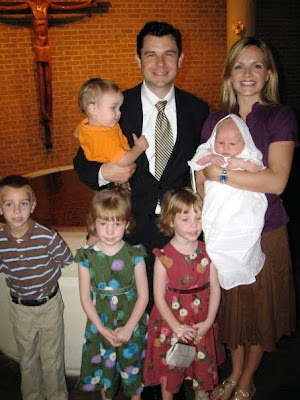 I have also published a book which includes the initial reason why I investigated Catholicism – The Crucified Rabbi: Judaism and the Origins of Catholic Christianity

May God bless you,
and I hope you enjoy the Canterbury Tales blog.

The Story of my Conversion to Catholicism (Audio Version)