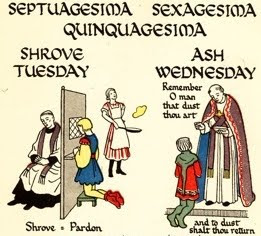 According to Pope Saint Leo the Great, the forty days of fasting prior to Easter is of Apostolic origin. These forty days of Lent are a season of penance for the faithful as they prepare for the joyful commemoration of the Resurrection of Christ.
Lent is the time for asceticism and asceticism originally referred to athletic rigor and competition. As you know, most professional sports also have a “pre-season” dedicated to preparing for the real season. Coaches know that their athletes need a few unofficial games to get back in the swing of things. It’s also a time for coaches to reevaluate their strategies for the “real season.”
The Greeks began to anticipate the Great Lent by a lighter penitential pre-season prior to Lent.  Saint Gregory the Great corresponded to this tradition and added three additional weeks of preparation prior to Ash Wednesday. These Sundays were called Septuagesima, Sexagesima, and Quinquagesima Sundays – Latin for “seventieth, sixtieth, and fiftieth.”
This begs the question, why do Catholics need a “pre-Lent” to prepare for “real Lent”?
The “pre-Lent” season of Septuagesima, Sexagesima, and Quinquagesima are not Lenten days per se, but they are penitential. The idea is that we cannot quit the flesh “cold turkey” and go into “penance mode” over-night between Fat Tuesday to Ash Wednesday. We must gradually adjust for Lent. We begin to increase our penances on Septuagesima, so that we’re in full swing by Ash Wednesday. Like NFL players, we can make adjustments during this time so that when Lent begins, we’re ready to go.
Quinquagesima Sunday is indeed the fiftieth day before Easter (counting inclusively), but the other Sundays, “Sexagesima” and “Septuagesima,” do not correspond to the interval between these Sundays and Easter. They are simply round numbers. Incidentally, Amalarius of Metz would have the name indicate a period of “seventy days” made up of the nine weeks to Easter plus Easter Week as mystically signifying the seventy-year Babylonian captivity (cf. “Septuagesima” in Catholic Encyclopedia). This is pretty nifty if you ask me.
When I was an Anglican, we observed Septuagesima, Sexagesima, and Quinquagesima. To my shame, I never observed them penitentially. Nevertheless, they did have a psychological effect. One was never surprised by the coming of Lent. One never said: “Wow, tomorrow is Ash Wednesday! Where did that come from?” The three Sundays of Septuagesima were like weather alerts. You knew that the storm of penance was gradually approaching.
When we became Catholic, Deo gratias, I noted that the Catholic Church did not observe Septuagesima, Sexagesima, and Quinquagesima prior to Lent.
However, I am glad to learn that the “gesimas” were retained in the 1962 Missal of His Holiness John XXIII (i.e. the Latin Mass or the Extraordinary Form allowed by the Pope). Now that we’re attending the Latin Mass, we can observe this “pre-Lent” liturgically in the Catholic Church. I love it!
“The Lord is nigh unto them that are of a contrite heart: and he will save the humble of spirit.” (Psalm 33:19)
“That we may find thy mercy: nevertheless, in a contrite heart and humble spirit let us be accepted. ” (Daniel 3:39)
“Saying: If we do not penance, we shall fall into the hands of the Lord, and not into the hands of men. ” (Sirach 2:22)
“Thy prophets have seen false and foolish things for thee: and they have not laid open thy iniquity, to excite thee to penance: but they have seen for thee false revelations and banishments. ” (Lamentations 2:14)
“Bring forth therefore fruit worthy of penance.” (Matthew 3:8)
“No, I say to you: but unless you shall do penance, you shall all likewise perish.” (Luke 13:3)